In a monastery in northern India, thinly clad Tibetan monks sat quietly in a room where the temperature was a chilly 40 degrees Fahrenheit. Using a yoga technique known as g Tum-mo, they entered a state of deep meditation. Other monks soaked 3-by-6-foot sheets in cold water (49 degrees) and placed them over the meditators’ shoulders. For untrained people, such frigid wrappings would produce uncontrolled shivering.

If body temperatures continue to drop under these conditions, death can result. But it was not long before steam began rising from the sheets. As a result of body heat produced by the monks during meditation, the sheets dried in about an hour. 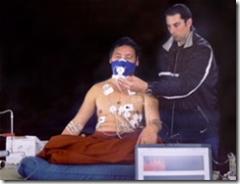 Picture Left: A Buddhist monk has his vital signs measured as he prepares to enter an advanced state of meditation in Normandy, France. During meditation, the monk’s body produces enough heat to dry cold, wet sheets put over his shoulders in a frigid room (Photo by Herbert Benson).

Attendants removed the sheets, then covered the meditators with a second chilled, wet wrapping. Each monk was required to dry three sheets over a period of several hours.

Why would anyone do this? Herbert Benson, who has been studying g Tum-mo for 20 years, answers that “Buddhists feel the reality we live in is not the ultimate one. There’s another reality we can tap into that’s unaffected by our emotions, by our everyday world. Buddhists believe this state of mind can be achieved by doing good for others and by meditation. The heat they generate during the process is just a by-product of g Tum-mo meditation.”

Benson is an associate professor of medicine at the Harvard Medical School and president of the Mind/Body Medical Institute at Beth Israel Deaconess Medical Center in Boston. He firmly believes that studying advanced forms of meditation “can uncover capacities that will help us to better treat stress-related illnesses.”

Benson developed the “relaxation response,” which he describes as “a physiological state opposite to stress.” It is characterized by decreases in metabolism, breathing rate, heart rate, and blood pressure. He and others have amassed evidence that it can help those suffering from illnesses caused or exacerbated by stress. Benson and colleagues use it to treat anxiety, mild and moderate depression, high blood pressure, heartbeat irregularities, excessive anger, insomnia, and even infertility. His team also uses this type of simple meditation to calm those who have been traumatized by the deaths of others, or by diagnoses of cancer or other painful, life-threatening illnesses.

“More than 60 percent of visits to physicians in the United States are due to stress-related problems, most of which are poorly treated by drugs, surgery, or other medical procedures,” Benson maintains.

The Mind/Body Medical Institute is now training people to use the relaxation response to help people working at Ground Zero in New York City, where two airplanes toppled the World Trade Center Towers last Sept. 11. Facilities have been set up at nearby St. Paul’s Chapel to aid people still working on clearing wreckage and bodies. Anyone else who feels stressed by those terrible events can also obtain help at the chapel. “We are training the trainers who work there,” Benson says.

The relaxation response involves repeating a word, sound, phrase, or short prayer while disregarding intrusive thoughts. “If such an easy-to-master practice can bring about the remarkable changes we observe,” Benson notes. “I want to investigate what advanced forms of meditation can do to help the mind control physical processes once thought to be uncontrollable.”

Iconic One Theme | Powered by Wordpress